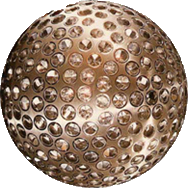 The LAser GEOdynamic Satellite (LAGEOS) was designed by NASA and launched May 4, 1976. It was the first spacecraft dedicated exclusively to high-precision laser ranging and provided the first opportunity to acquire laser-ranging data that were not degraded by errors originating in the satellite orbit or satellite array. LAGEOS-2, based on the original LAGEOS design, was built by the Italian Space Agency and launched on October 22, 1992.

The LAGEOS satellites are covered with 426 cube corner reflectors with all but four of these reflectors made with fused silica glass. The other four reflectors are made of germanium to obtain measurements in the infrared for experimental studies of reflectivity and satellite orientation. 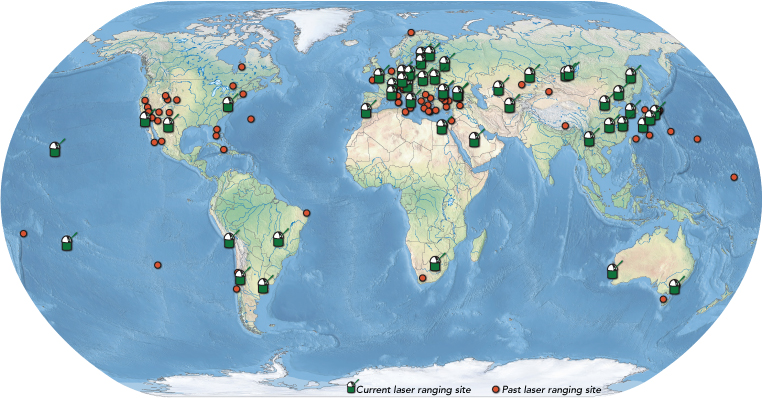 Over 120 Satellite Laser Ranging (SLR) sites around the world have tracked LAGEOS since its launch on May 4, 1976. Today, a network of over 35 SLR stations continue to track LAGEOS daily.

Satellite Laser Ranging (SLR) observations on LAGEOS, LAGEOS-2, Etalon-1 and Etalon-2 are reduced in 7-day arcs to generate the individual Earth Orientation Parameters (EOP) and station positions solutions. The observations are reduced to generate a loosely constrained solution for station coordinates and EOPs. The EOPs include the x-pole, y-pole and Length-Of-Day (LOD), all computed as a daily average. The station positions, referenced to the midpoint of each 7-day arc, refer to the official station markers.

Two types of products are distributed each week by the ILRS: a loosely constrained estimation of coordinates and EOP and an EOP solution, derived from the previous one and constrained to the International Terrestrial Reference Frame (ITRF). Official ILRS Analysis Centers and Combination Centers are tasked with the generation of the products with individual and combined solutions respectively. Both the individual and combined solutions follow strict standards agreed upon within the ILRS to provide high quality products consistent with the IERS Conventions.

In addition to the regular products, LAGEOS data is also used as part of the ITRF. The time series of weekly solutions are delivered to to the International Earth Rotation and Reference Systems Service (IERS) as an official ILRS contributed data set for each ITRF definition, the most recent being ITRF2014. More information on the ILRS products can be found on the ILRS website.

Space Down to Earth: Space Geodesy before LAGEOS

View the entire 28-minute video (1970) from the National Archives.